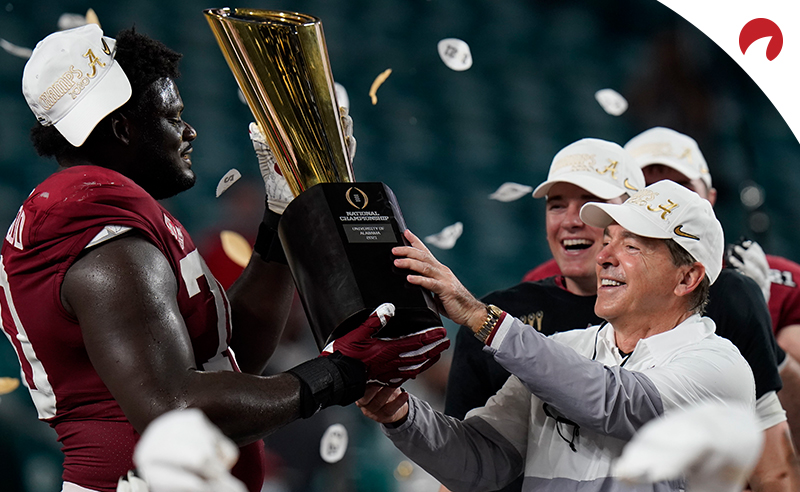 The wild and wacky 2020-21 college football season came to an end with the Alabama Crimson Tide being crowned the national champions. Now, we take a quick look at the 2021-22 national championship odds and once again Alabama sits in the top spot at +350.

Online sportsbook BetOnline has released the 2022 national championship odds, making Alabama the +350 favorite. The Crimson Tide are followed closely by Clemson at +400, Georgia at +400, Oklahoma at +600 and Ohio State at +650 to round out the top five on the oddsboard.

Odds as of January 12 at BetOnline

New to the college football scene? Check out our handy college football betting guide to help you get in the action. Also, keep an eye on our College Football Odds page for the latest up-to-date betting lines.

The Crimson Tide were unstoppable in the 2020-21 season, running the table with a 13-0 season culminating in a national championship. ’Bama had just one game that it won by fewer than 10 points.

Many players on this team will be making the jump to the NFL, including WR and Heisman Trophy winner DeVonta Smith, RB Najee Harris and QB Mac Jones. But the Tide lead the nation with the top-ranked recruiting class for this upcoming season.

Which Teams Are Providing Betting Value?

I talked about Alabama having the best recruiting class in two of the last three years – well, it was Georgia that had the best one in 2020 and the second-best in 2019. The majority of those recruits come on the defensive side of the ball, notably Nolan Smith, the 2019 top recruit in the country on the edge, and 2020 No. 4 recruit cornerback Kelee Ringo. There’s experience in the backfield, so this team can cause a lot of issues.

As for the Buckeyes, they recruited edge rusher Jack Sawyer, who was the No. 4 recruit in the 2021 class, and they are the front-runner to get fellow edge rusher J.T. Tuimoloau, the top recruit for this class. Offensively, the team has brought in several top-end receivers over the past few years. The question for me is who will be throwing the ball to these guys. The Buckeyes should be an interesting and scrappy team. With odds of +650, they are definitely intriguing.

What is a Futures Bet for NCAA Football Teams?

When it comes to big events for any sport, you can bet months in advance. In this case, a futures bet is a wager made on which team will win the national championship. Each week, oddsmakers will update the odds to reflect how a squad is doing. If a team is plagued with injuries, their chances of making it to the final game slim down. A surging squad will see their odds skyrocket.

When you go to a college football sportsbook, you’ll see the betting lines laid out like this:

Unlike a traditional straight-up bet where there’s a clear favorite marked by the minus sign (-), ‘Bama is the fave since they have the lowest odds. The rest are considered underdogs.

If you believe that LSU has the greatest odds of winning the championship, and you bet $50 on them, you’d get a payout of $275 – your original $50 is returned along with your winnings of $225. On the other hand, if you’re looking at Georgia and think they’re going to turn it around and win it all, that same $50 would give you $750 – you get your $50 back, plus your prize of $700. Our odds calculating tool will show you how much you’d win based on the odds and amount bet.

When you see futures odds that you like, it’s best to jump on them early. As mentioned above, betting sites will adjust the odds as we get closer to bowl season and teams move up and down in the standings.

SLOTSUPS should need no introduction to slots fans. Our mobile slots are as good as you would expect and SLOTSUPS casinos have long earned a reputation for trustworthiness and fair play! Get some gold with the Mobile Slot Planet 7 casino by SLOTSUPS Planet 7 casino was a massive hit for SLOTSUPS as an online…

At Bovada Casino, we just can’t get enough of Blackjack games. That’s why we keep adding more versions to play for real money in our online casino. We have traditional online Blackjack games and ones with a twist, so no matter what you’re into, rest assured we’ll have something that fits the bill in our…

One of the more popular legal online sportsbooks is Bovada. Bovada is an extension of the Bodog brand that has been around for decades. Once Bodog left the American market in 2011, its license holder opened Bovada.lv to continue offering its great product to Americans. Although Bovada has only been in service for a year…